Struggling to get your child to sleep? Always fighting bed time? Constant negotiations? Siesta Testa solves this! Make your child believe they have batteries which will be recharged whilst they sleep! DISCLAIMER:This app is intended for entertai...
iOS
Tweet
Sonntag, 13. Dezember 2015, 21:10 Uhr

Struggling to get your child to sleep? Always fighting bed time? Constant negotiations? Siesta Testa solves this!
Make your child believe they have batteries which will be recharged whilst they sleep!
DISCLAIMER:This app is intended for entertainment purposes only and does not detect a person’s true energy level.

Children are used to smartphones and high tech toys, knowing that none of these work when the battery goes flat. To your child, our app appears to test their current energy levels, which shows as a low battery display when they hold their finger on the screen’s testing circle. Your child sees when their batteries are running low and will be convinced that it is time for their sleep. Plain old fashioned trickery that works!

Siesta Testa is an independent voice giving a definitive result to your child, making it easier for you to win the ‘go to sleep!’ argument. Because, let’s face it, children are intuitively great negotiators; using lengthy arguments, tantrums and tears to convince you that it is definitely not time for a snooze. And too often, they win the fight just because we as parents get worn down. Kids will accept the results from a device sooner than from a parent, who is obviously wrong, up to something or, the standard favourite, just being mean!
The low energy level result shown on Siesta Testa is actually based on the child's normal sleep routine, programmed by you when you set up your child’s profile. Realistically, no app can detect the energy levels of a child. Siesta Testa is simply intended as leverage for you to get your child to go to sleep. No guilt for pulling the blanket over their eyes, so to speak, it really works!

NIFTY FEATURES
▪ Customisable profile
▪ Add pics so your child can see themselves and know it must be true
▪ Change the text that shows with the battery results, customize this on the Settings tab
▪ Awesome, sci-fi sounds and vibrations when testing battery levels – great fun for kids!
▪ Click the Facebook icon in the top right corner for a direct link to our FB site, for more info, tips and tricks
▪ Add your own profile and convince your boss your energy levels are low and you need to take a power nap!
▪ IAP to allow additional features

HOW IT WORKS
Set up a profile for your child defining their normal sleep routines, then let Junior test their own energy levels by holding one finger on the screen for a few seconds. The app display will appear to be calculating their energy level, and show how much energy they have left in their battery. Simple!  Some tried and tested suggestions to ensure best results:
• For the first few days, introduce your munchkin to Siesta Testa by letting them test their energy levels several times a day. They will see their own different ‘battery levels’ throughout the day, and be convinced that it’s the real deal.
• Explain to your child about their batteries - how they get run down, what it means for their energy levels, and how they can easily recharge them by having a snooze. Let your child have fun deciding where their batteries are in their bodies.
• Set up a profile for yourself too - this way your child can see that they have to go to bed before you as they have the least energy.

The percentage of energy remaining is calculated as the time between the child's normal scheduled sleep and awake times, input by you during the initial profile setup. If your child is testing themselves during a time when they should be asleep, then the result is determined in one of two ways: During the first half of the period in which they should be asleep, the energy level shown is 1%. This is for children who fight the urge to sleep and may demand to be retested. During the second half of the supposed-to-be-asleep period, the result is altered to show a reduced energy level until their next sleep is completed. 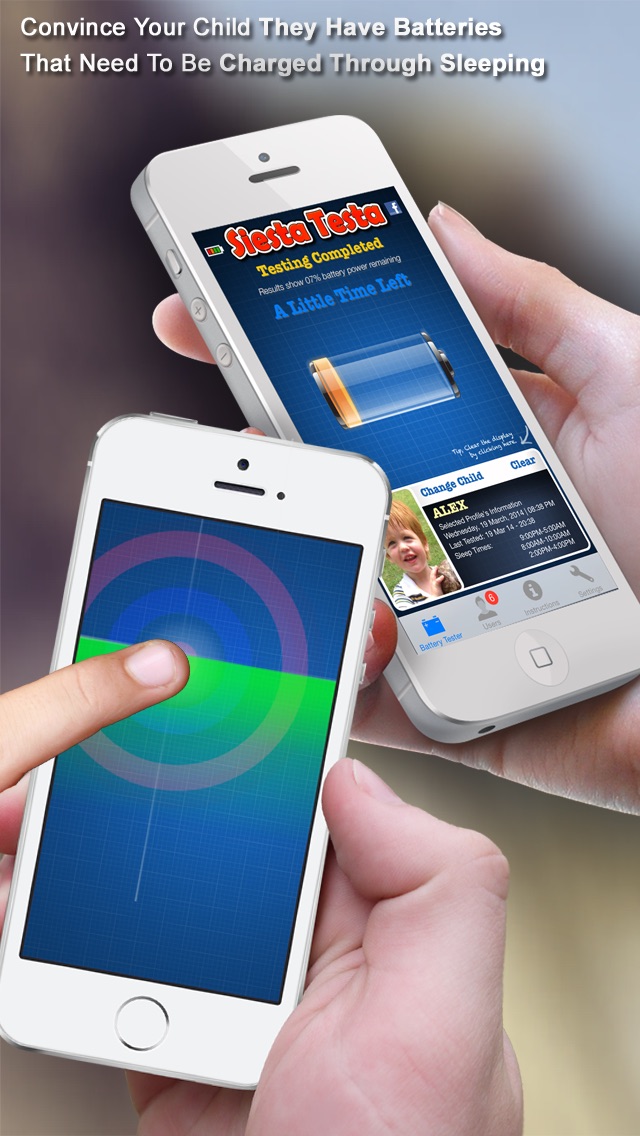 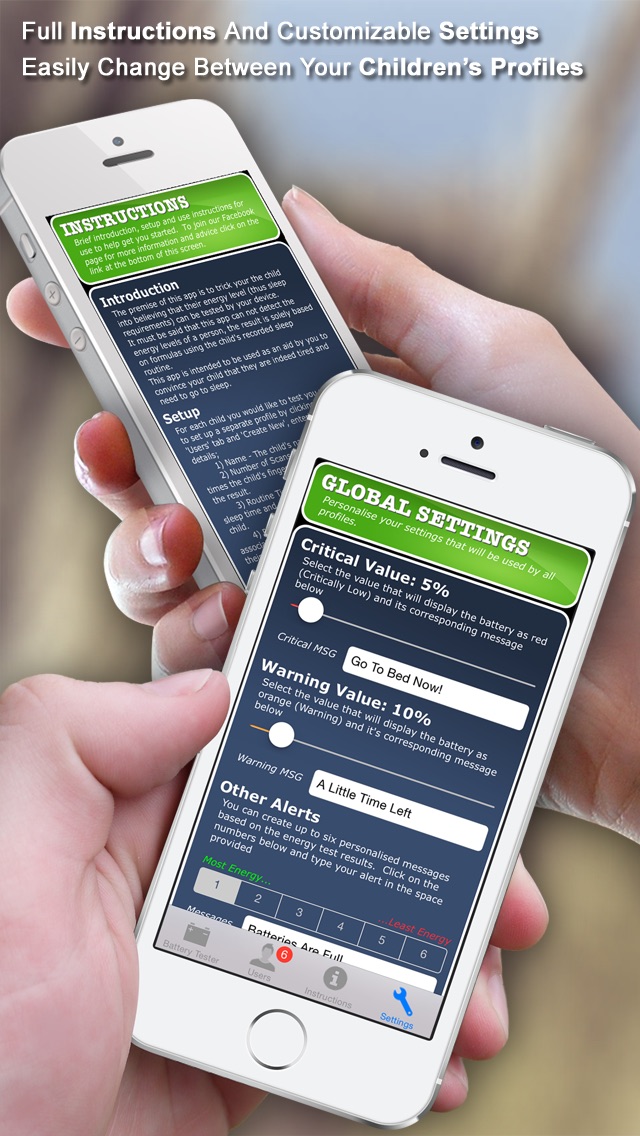 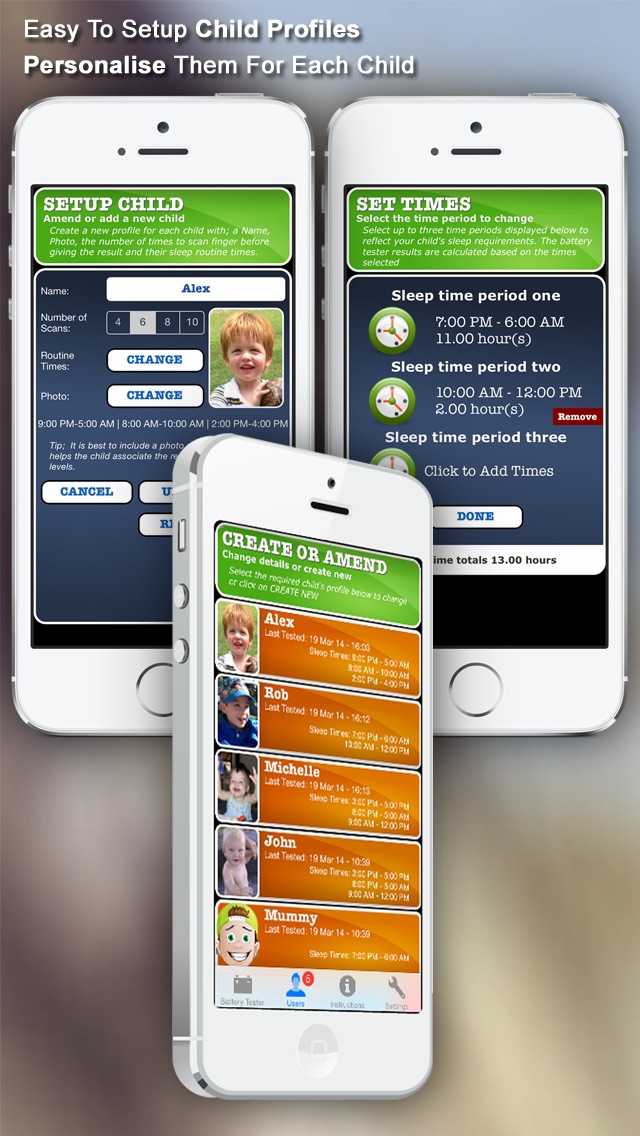 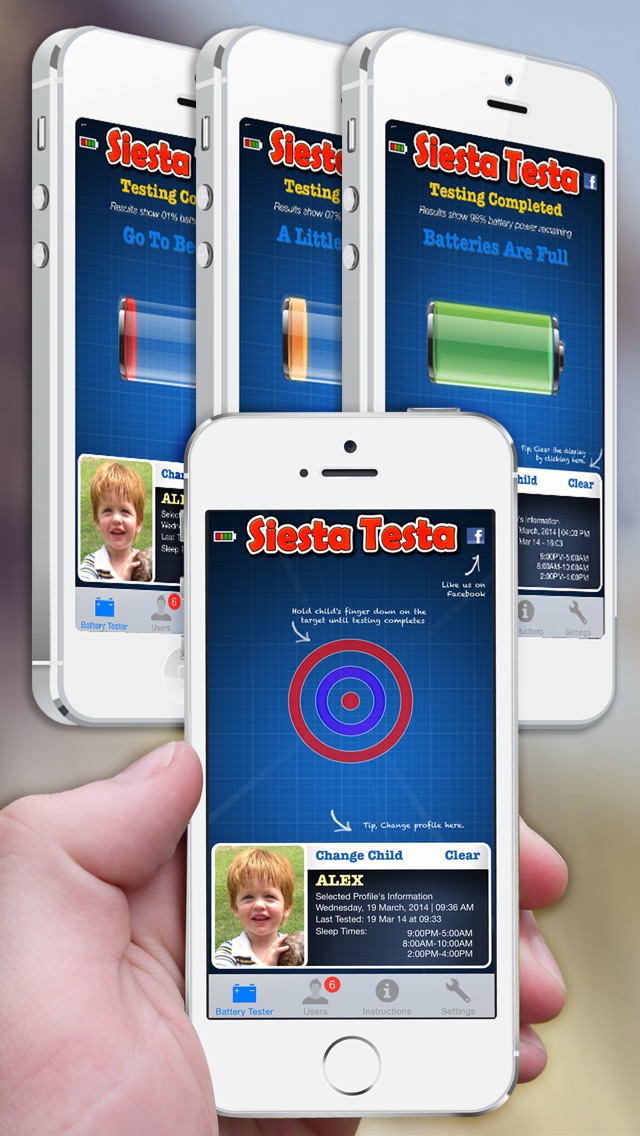