** App of the Year 2015 ** - Macstories GTD®, XYZ and everything in between - it can handle it all. Seriously. See and believe: Youtube.com/The2DoApp 2Do lets you take a completely different approach to managing your tasks. With its extremely s...
iOS
Tweet
Sonntag, 13. Dezember 2015, 20:08 Uhr

GTD®, XYZ and everything in between - it can handle it all. Seriously.

2Do lets you take a completely different approach to managing your tasks. With its extremely simple-to-use interface and a comprehensive and flexible set of powerful features, it lets you focus on what's most important to you: your life. There is no wrong way of using 2Do, and unlike other to-do apps, it won't force you in adhering to a particular task management methodology.

** NEW **
Email to 2Do: Optional plugin that allows you to integrate your email address directly with 2Do, thus allowing you to email yourself tasks from anywhere.

LIST GROUPS, LISTS, INBOX & SMART LISTS
• In addition to built-in Focus lists that allow you to conveniently view upcoming, starred or scheduled tasks, you can create multiple lists to manage and organize your tasks.
• Built-in support for GTD Inbox
• Smart lists let you harness the true potential of 2Do using a number of search options, filters and search pre-sets. Using Smart Lists, you can create custom views of your tasks and use them to focus-in or find frequently managed tasks.

PINCH ZOOMING
• Control the amount of information you wish to see with a simple pinch-to-zoom gesture, from single line titles to multiple lines of titles, notes and tags.

REIMAGINED TASK EDITOR & QUICK ADD
• With focus on switching between editors effortlessly using a single tap only, you’ll save dozens of taps and swipes when editing your tasks.
• Save your thoughts as they come to you, by using Quick Add (Tap-hold on [+])
• X-callback-url support

YOUR TASKS UNLIMITED
• Set a Start Date to hide tasks from a list before they're relevant and add Duration to put an estimate on the amount of time you’ll be spending on your task
• Add an action to call, write an email or message, navigate or trigger a URL Scheme right from 2Do
• Attach an image or a voice memo to your tasks

DESKTOP-CLASS IPAD APP
• Your Lists, Tasks, Daily Summary and Calendar, including Calendar Events, can all be viewed and managed from the same screen.
• Keyboard shortcuts

APPLE WATCH APP
• Get to your tasks directly from your wrist 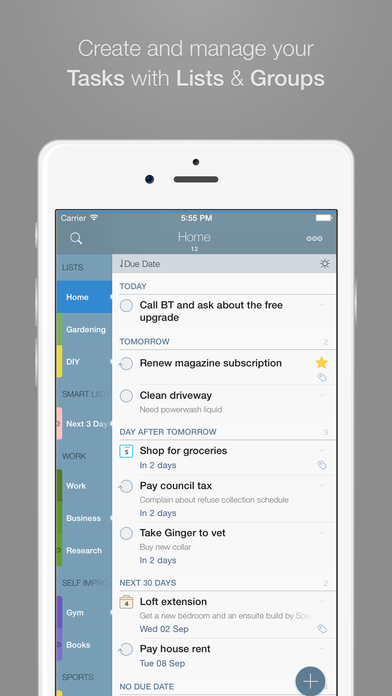 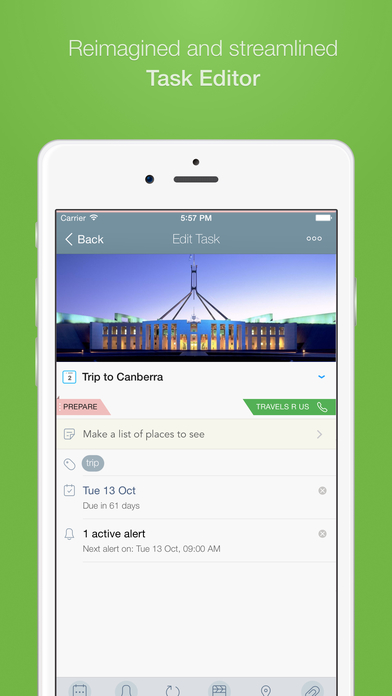 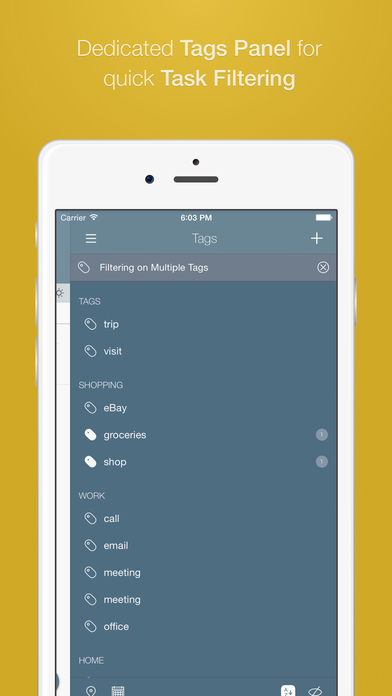 Errands is a task manager with a pleasing design and is easy to learn and...

PRODUCTEEV BY JIVE HELPS TEAMS BE MORE PRODUCTIVE WITH A SIMPLE YET POWERFUL...

Airmail - Your Mail With You

Airmail is a powerful mail client for Mac, now available for iPhone and...